Translate your Mobile App for free in 3 easy steps

This is a simple way to translate your Android (or iOs) application into multiple languages, without using an expensive professional translation service for the initial translation or having to write any additional code. The solution is easy to manage and share for review. I've used this approach in my last 4 jobs and it works for all classes of application. (In one company I used this approach to translate over 8000 strings for a web based app.).
Once you have completed the translation you can manage the strings in Google's Android Translation tool (https://developer.android.com/studio/write/translations-editor.html).

Warning: You should still use someone fluent in the chosen language to verify the final application and make sure you don't end up with something that does not fit your application.

These instructions assume that you have developed an Android application and have located your strings.xml file under the res/values/ directory. The steps are similar with iOs but are not covered here.

You will be using Google Spreadsheets, so you need a Google account. I could just share the spreadsheet - but where's the fun in that?

In your Android project copy the strings.xml file to strings.csv.
Open strings.csv in your favourite editor.
(I've used strings.xml in the screenshot to highlight specific strings). 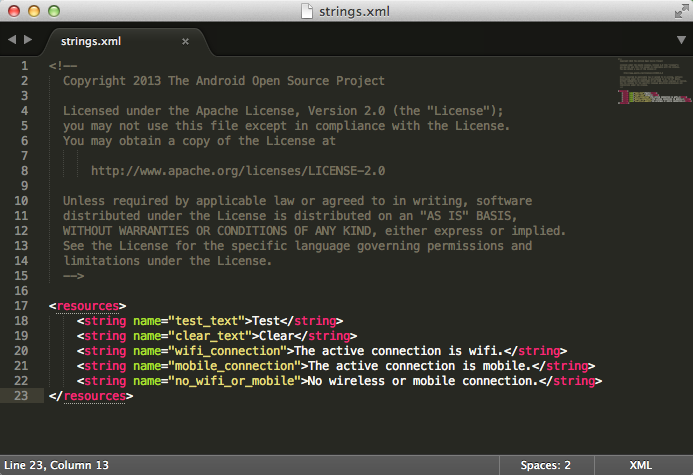 You are going to remove everything other than the text in yellow and white.

Step 2: Import into a Google Spreadsheet

Open a new Google spreadsheet. From the File menu click 'Import' and upload your csv file.

All being well you should have two columns in your spreadsheet.

Now insert one row at the top of the spreadsheet.
Enter the following headers for each of the columns

You can read up on language codes here: https://en.wikipedia.org/wiki/ISO_3166-1_alpha-2

Now here comes the fun ! Use the Google Translate function to do the translation for you.
The function takes the following format: source string, source language, target language.

So based on this enter the following in column C, row 2.

Now you have the translated strings we need to create the XML strings to add back into your app.

Recreate the XML string by concatenating column A and D in a <string></string> tag.
Enter the following formula in column D, row 2 onwards.

Once the strings have been translated you can select column D and copy the contents into a text file called strings.xml and store this as per the Android instructions (in our example we would store the strings.xml file in /res/values-de/ ).

OK - this is good - but what if you want to translate multiple languages in one go? Just clone the spreadsheet and change cell C1 from 'de' to the (two or four) appropriate language string you want - such as 'fr', 'pt' 'ko' etc.

Simple app, to query Splunk with JavaScript, no SDK or frameworks required

Sometimes you just need the basics. This post walks you through the simplest, quickest way to query data from Splunk, using plain old JavaS...