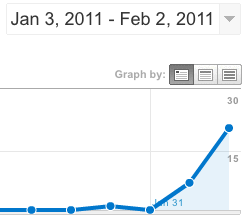 Preamble
I've been an advocate of Adobe AIR since I used the eBay "San Dimas" application (AIR was called Apollo, San Dimas became eBay Desktop). The potential to modern, build rich and smart client applications that have all the benefits of a web application (automated application updates) but the elegance and simplicity of a desktop application (native desktop integration) is a great option for developers who want to build modern client/server applications.
Recent developments by Salesforce (database), Amazon (email) and Google (XMPP) only strengthen the value of using AIR for rich client applications backed by cloud based Enterprise services. (AIR doesn't solve everything and modern browsers such as Chrome and Safari have comparable capabilities through their support for HTML5 ).

One of the downsides of using Adobe AIR, and Flash in general, has been the lack of support for Google Analytics. It was something that we severely lacked when we built the desktop gadgets at Oracle (for Siebel and CRM OnDemand). While we could track the downloads from the Oracle site, there was very little else that we could do (short of putting logic into the gadgets themselves to writeback to a web service) to track basic statistics such as how often a gadget was used, what features were used etc.
Lately I've been working with Adobe AIR for Android and have the same requirements for mobile application development.

The wait is over...
The recent addition of the AS3 library for Google analytics now enables any AIR/Flash developer to add Google analytics to their code and gain the same insight that web developers have enjoyed for years. And the other good news is, it is just as easy to add tracking to your mobile or desktop application as it is for a traditional web application.

Get up and running in 4 easy steps


3. Initialise the tracking variable with your Google Analytics tracking token (replace "UA-123-4567" with your own token).


In this example, every time a user clicks the button, a virtual pageview of "hello world" is sent to the Google Analytics tracking servers.

That's it, you're done!! Of course in your mobile or desktop application you don't have pages etc., but the great thing is that the mechanism is so flexible that you can choose to implement based on your own needs. I used the simple URL scheme to map specific modules and actions.

Simple app, to query Splunk with JavaScript, no SDK or frameworks required

Sometimes you just need the basics. This post walks you through the simplest, quickest way to query data from Splunk, using plain old JavaS...